The WLIA Foundation, Inc named its scholarship after Damon Anderson, who died unexpectedly at age 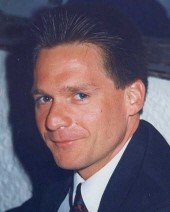 Damon was a graduate of the University of Wisconsin-Milwaukee where he received his Master’s degree in Geography.  While at Ozaukee County, he maintained his connection to the school and hired many student interns.  Ozaukee County was able to complete the projects necessary to further their land information program while the students gained valuable experience that prepared them for their future careers in geography and land information.

Damon was dedicated to his family and active in his community.  Among his community affiliations were President and Treasurer of the Port Washington Historical Society, co-chair of the organization committee for the Maritime Heritage Museum, Franklin Street Beautification Committee, Coal Dock Restoration Project and 4-H.  Damon’s efforts helped establish the Inter-Urban Bike Trail and the establishment of the Port Washington Historical District, preserving the many historical landmarks in the downtown area.

Damon was a respected member of our association and his presence continues to be missed.