Posted By: Sandy Disrud in Community, 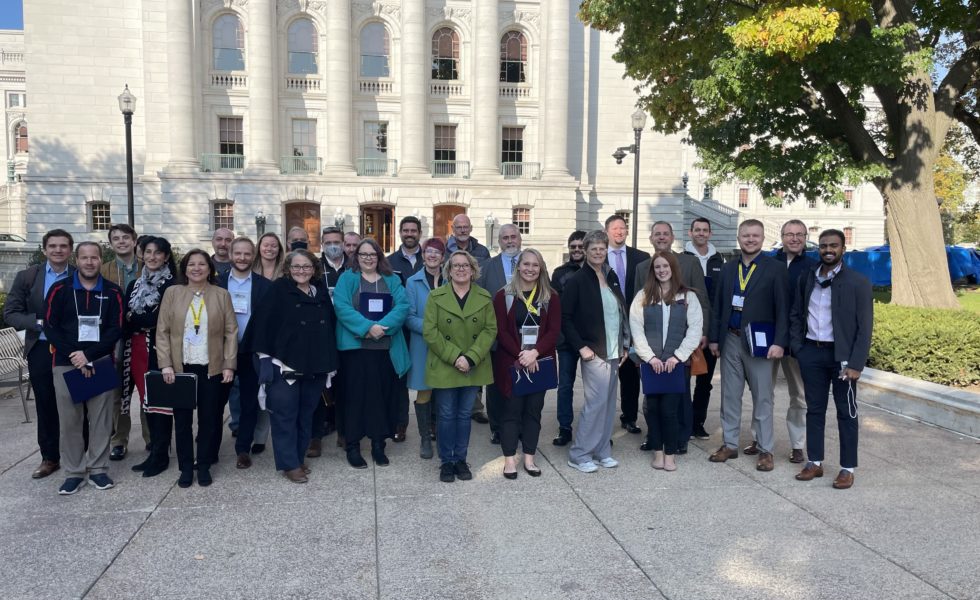 It has been a busy year for the legislative committee. Our experienced committee members have been hard at work drafting support letters, monitoring legislation, updating whitepapers, and lobbying on issues important to WLIA. Here is a quick update on some of the committee’s most recent activities.

WLIA at the Capitol!

A group of 30 WLIA members took a break from our Fall Regional Meeting in Madison to walk across the street and talk with Wisconsin legislators and their staff about a variety of land information and geospatial topics. With the help of our lobbyist, Nels Rude, our legislative committee drafted talking points for our members to discuss with Wisconsin lawmakers. These topics ranged from NG911, Daniels Law, AB608, Broadband, and general WLIA background discussions. Our team of 30 broke into 4 separate groups that each visited 3 offices for a total of 12 legislative offices that now have a better understanding of what is important and necessary for our industry to succeed and better serve the citizens of Wisconsin. We left each office with two requests, the first was requesting their support of the NG911 GIS grant legislation and the second was to view WLIA as experts in the land information and geospatial fields and utilize our organization as a resource when legislation arises concerning our expertise. We want to be consulted early on in the process so that we can make an impact if necessary. After the visits, we were pleased to hear that one of the representatives that we met with, signed on as a Co-Sponsor of the NG911 GIS grant legislation.

The Legislative Committee also testified at the capitol on the NG911 Grant Funding bill. On December 1, 2021 there was a public hearing before the Senate Transportation and Local Government Committee. Senator Howard Marklein co-authored Senate Bill 673 and it was introduced by his staff Peter Hienz. Zach Nienow and Sandy Disrud testified as to the importance of this grant funding on behalf of the WLIA Legislative Committee.

A week later, on December 8, 2021, the public hearing was held before the Assembly Committee on State Affairs for its companion Assembly Bill 708. Representative Amy Loudenbeck also co-authored the bill and made remarks. She answered a couple of budget related questions from the committee. Fred Iausly and Sandy Disrud also testified on behalf of WLIA.

The next step is the executive committee and we are on track for passage early in 2022!