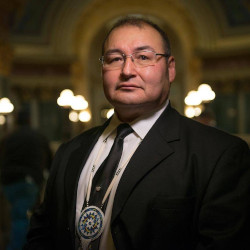 We are excited to announce that Ho-Chunk Nation Preservation Representative William “Nąąwącekǧize” Quackenbush will be providing a keynote address at the 2023 WLIA Annual Conference to be held February 22-24 at the Kalahari Resort in the Wisconsin Dells.  WIlliam is a Ho-Chunk Deer Clan Member, Tribal Historical Preservation Officer, and Cultural Resources Division Manager. 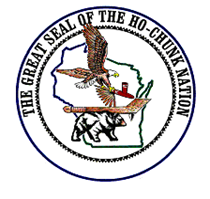 In 1999, William began working for the Ho-Chunk Nation, Heritage Preservation Department as a Land Specialist focusing on Realty, Land into Trust Applications and Cultural & Natural Resource Management. In 2004, the Cultural Resources Division requested for William to be transferred to their Division initially as a Researcher, then to become the Tribal Historic Preservation Officer (THPO) for the Ho-Chunk Nation, who was at that time creating a HCN THPO program to address tribal preservation needs. In 2008, William became the HCN HPD - Cultural Resources Division Manager.  Some of his other professional reponsbilities include, Ground Penetrating Radar Operator (GPR) since 2002, Tribal Historian since 2006, and Ho-Chunk Nation Tribal Monitor since 2012.

As if that wasn't enough, he also has sat on several state and federal committees including the Kickapoo Valley Reserve Board, the Mississippi Valley Archaeological Center Board, the Wisconsin Inter-Tribal Repatriations Committee, the National Association of Tribal Historic Preservation Officers, the Fox/Wisconsin Heritage Parkway Board, the Sauk County FSA Committee, and the Inter-Tribal Bison Cooperative.

William receives preservation, environmental and cultural guidance and advice from the Ho-Chunk Nation Heritage Preservation Board, which is comprised of 1 Executive Director and 5 Board members, expert advisors in their own field.  Their mission statement is “To protect and preserve the HooCak culture and heritage as living forces in the lives of the HooCak Wajic. To nurture our Nation’s culture – to strengthen it as a living source of identity and pride for our people."  He also receives guidance from the Ho-Chunk Nation Traditional Courts, comprised of Traditional Tribal Elder members representing each of the 12 Clans using Oral Traditional Guidance, and Caa Yaakikarac Leaders.

If you couldn't tell already, William is a huge force and a deep well of knowledge around the Ho-Chunk Nation.  We are so grateful and thrilled that he is coming to share a small portion with us!

Visit our Event Page for more information and to submit an abstract for workshops or presentations.